Definitions for the i2b2 vocabularies reside in the Ontology Management (ONT) Cell. This cell contains concepts and information about relationships between concepts for the entire hive. It is accessed by other cells to give semantic meaning to data. Vocabularies in the ONT cell are organized in hierarchical structures that represent the relationship between terms. The top levels in the hierarchy are called the "parents" or "roots", with the lower levels being their "children". Elements occurring on the same level are known as "siblings". A level in a hierarchy is sometimes referred to as a "node" and a group of related data is called a "category". A category is defined as a set of data for which there is a common rule or rules for querying against the Clinical Research Chart (CRC). A category is usually represented visually as a table of terms. An example of a category is the Diagnosis category shown in the below image, which consists of a table of diagnoses terms and uses a single rule to build all diagnosis queries. 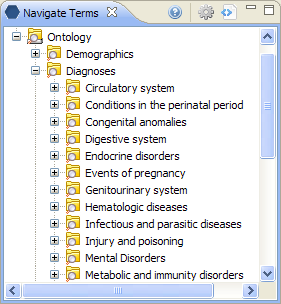 Vocabularies in the ONT cell may originate from different sources; the codes from each source are distinguished from the others by a unique prefix that is appended to the source code. Each distinct vocabulary and their associated codes are called a scheme.