This version of i2b2-Wizard features a SHRINE (Shared Health Research Information Network) installer that was integrated into i2b2-Wiazard as a part of the IRDT2 project. SHRINE is an add-on for i2b2 that allows running distributed queries. SHRINE basically acts as an i2b2 "proxy", which accepts incoming i2b2 queries and distributes them to other (typically external) i2b2 instances. Their results are then aggregated by the SHRINE component and presented to the user in the SHRINE Web Client, which is very similar to the i2b2 Web Client, but capable of displaying the results, separated by site. More information on SHRINE can be found on http://open.med.harvard.edu/display/SHRINE. 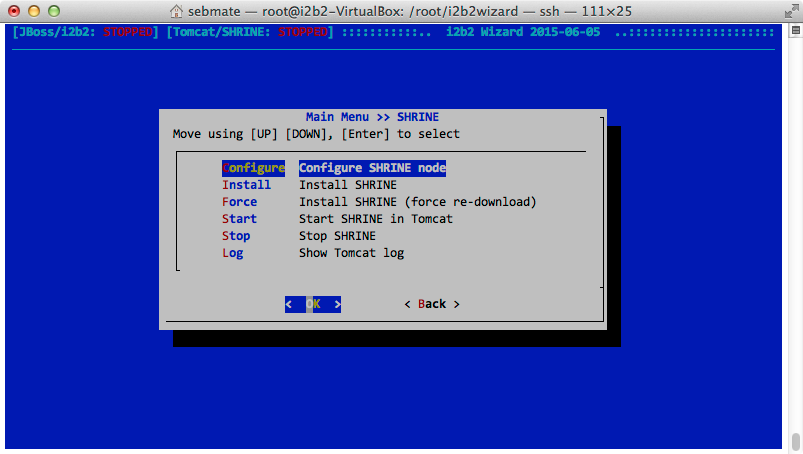 The SHRINE installer is currently not working. We're trying hard to keep up with the changes in the SHRINE SVN. However, changes in version branches (which should NOT change) make this almost impossible. Please come back here to see the status of the SHRINE integration in i2b2 Wizard.

First, change the parameters in the first menu entry "Configure SHRINE node", as shown in the following screenshot: 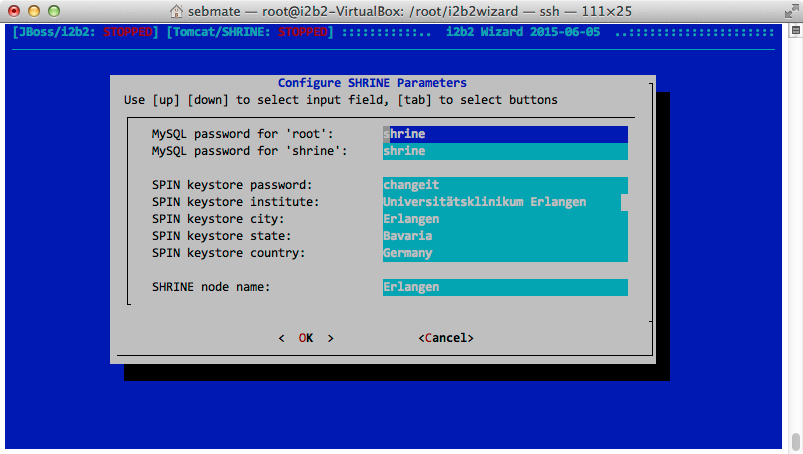 Then install SHRINE, simply by running "SHRINE => Install SRHINE". The installer will then guide you through the installation process. If this has not happened before, the tool will automatically install the selected i2b2 version and load the i2b2 Demo data, which is also used for the SHRINE demo project.

Use the "Start SHRINE in Tomcat" and "Stop SHRINE" functions to start and stop SHRINE, which runs in a tomcat server.

SHRINE can be accessed on "http://localhost:6060/shrine-webclient". The default login is "shrine" with the password "demouser".

The default configuration created by the installation (see above) creates a minimalistic SHRINE node, which can query itself. The installer automatically takes care of all steps described on https://open.med.harvard.edu/display/SHRINE/Custom+Install, except for and advanced routing and detailed parameters configuration. If one wants to interconnect multiple i2b2 instances, additional configuration steps are necessary, as described in section "Routing within and between SHRINE subnetworks (Peer Groups)" by modifying the file .spin/conf/routingtable.xml. Please refer to the example on https://open.med.harvard.edu/display/SHRINE/Custom+Install.