The following table is a mapping between the elements in the Component & Connector Client-Server view shown in section 3.1.1, and the Modules Decomposition and Uses views shown in sections 3.2.1 and 3.2.2. The relationship shown is is-implemented-by, i.e. the elements from the C&C view shown at the top of the table are implemented by any selected elements from the Modules views, denoted by an "X" in the corresponding cell.

Both the metadata and the patient data are distributed to projects through the existence of independent databases (in SQL Server) or schemas (in Oracle). These will be referred to in the rest of the text as the "persistent storage location" or PSL. These PSL's are organized so that the data from two metadata representations can be merged to a "Super" data set. While a person is working on a specific project, they will be directed to data in a PSL associated with that project. In order to support the i2b2 project distribution strategy, the user is enrolled in numerous projects recorded within the i2b2 project management cell". The projects available to the user are returned in the web service call to the Project Management cell. The logic of selecting the correct PSL for the project is embodied in the following table:

The logic for selecting the PSL is as follows:

Other columns are specified as follows:

To restate, many cells need to access some kind of persistent storage, and these cells will organize their persistent storage so that it is self contained and can be apportioned in a way consistent with the project-based requirements of i2b2 described above. To that end, a table exists in many cells to make the decision of what persistent storage location to which a specific user will be directed, depending on the project and domain to which they are associated. Schemas within the metadata data source

This table is used to obtain a list of root elements of the Metadata tree. Each root element of the tree is represented by a single row in this table. The primary identifier of each Metadata root element in the Table_Access table is in the "{}c_table_cd" column. All messages that need to point to a specific Metadata root element will use this identifier, for example in the <Key> element of many messages where this identifier is represented as c_table_name_ (see messaging specification). Within the _c_table_name column is the actual name in the PSL of the Metadata table. The _c_protected_access_ boolean column designates whether one must have the protected access role (data_prot) to obtain data from this table. The other columns are defined in a similar manner to the columns of the Metadata table, with the following special notes: The _c_dimcode_ is used to allow the entire contents of a table to be queried in the data repository if the dimension table of the data repository has been set up in this fashion. While the _c_hlevel_ is traditionally 0 in this table (indicating one metadata table for each root element of the metadata tree), it is possible to 'flatten' the metadata tree so that multiple entries of single metadata table appear as root nodes. (see examples below)

A traditional table_access table is shown below: it has one entry for each table.

The following table_access table shows entries for multiple root elements from a single metadata table. The nine I2B2 elements shown here appear under the 'Ontology' root element in the example above, resulting in a 'flattened' hierarchy. 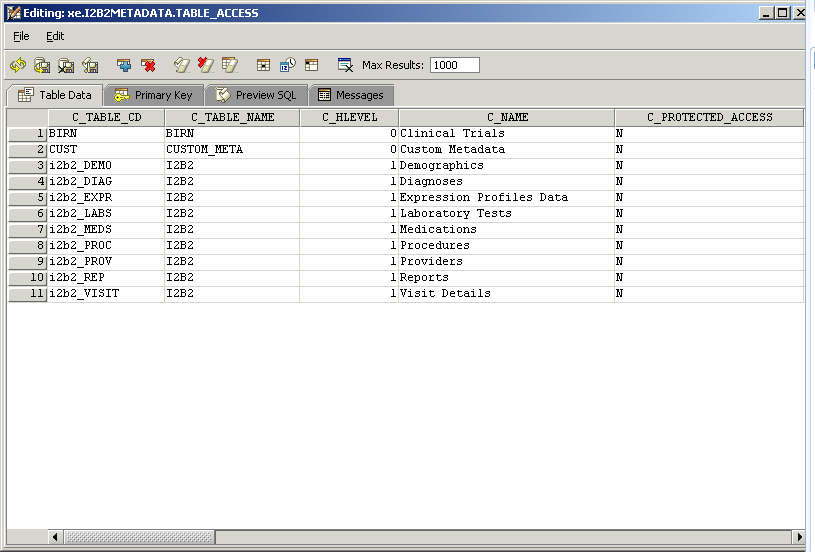 Also included in this table are modifiers associated with the terms contained within the Metadata table. The column 'm_applied_path' specifies the concept path, or c_fullname, of the concept the modifier is associated with. If a modifier applies to a concept and its descendents the 'm_applied_path' is appended with a '%'. Entries in the metadata table that are not modifiers should have the 'm_applied_path' set to '@'.
Additionally, its possible to specifiy concept(s) a modifier is not associated with. Assume a modifier has been assigned to a root concept and its descendents with an applied path of '\Diagnoses%'. To exclude this modifier from a child ('Mental disorders') of the root concept ('Diagnoses') we add an entry for the modifier with an applied path of '\Diagnoses\Mental disorders\' and set the exclusion_cd to 'X'. If we had wished to exclude this modiifer from the descendents of 'Mental disorders' we would append the applied path with a '%'.
Finally, in Release 1.6, we added two optional columns in support of external tools. The column 'c_path' contains the c_fullname of a node's parent. The column 'c_symbol' is a unique, abbreviated form of the node's c_name. A node's c_path, concatenated with its c_symbol form the node's c_fullname. Schemes table

An example of a Schemes table is shown below: